There are three kinds of people. Which is you?

You deserve everything you want. Your future is in your control. 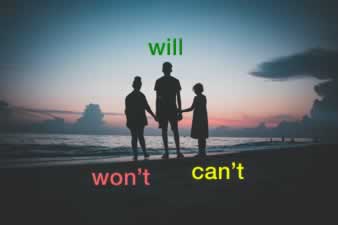 Countless movies tell you that there’s two kinds of people in this world. That’s a Hollywood lie. In reality, there are three. They are the wills, the won'ts, and the can'ts. The first accomplish everything; the second oppose or avoid everything, and the third fail at everything. Which one are you?

Most people are won’ts. A common trait with won’ts is that they often feel trapped. They’re trapped in a relationship, a job, or a crappy situation. They dream about changing for the better. They have the ability to make things change for the better. They just won’t do it. Ask yourself, are you a won’t? Here are some questions to help you figure it out: If you answered yes to any of these, and haven’t tried to do anything about it -- you’re a won’t. You should have a job you love. You should be paid well. You should be in charge of what you do, and how you do it. Your should have a relationship that makes you thrilled to see that person every day. You should have a government that works for you. You deserve those things, and you can have them all.

If you’ve answered yes and also tried to change these things – but failed, you’re a can’t. It’s actually better to be a can’t than a won’t. At least can’ts have the courage to try and change things! Trying is the first step towards making your life better. Can’ts just need help to achieve their goals. That’s OK, because everyone needs help sometimes.

Last but not least, are the wills. Wills see how they want their life to change. Wills take action towards achieving those dreams. Most importantly though, wills succeed. You may not know it yet, but you’re a will. Put your mind to it, get the help you need, and make your dreams a reality.

Like someone? Ask them out. They say no? Find someone else and ask them out. Eventually someone you like will say yes! Relationship sucks? Talk to your partner about how you feel. They won’t change? Leave and find a new partner. Eventually you’ll find someone perfect for you!

Job sucks? Boss sucks? Underpaid? Ask for better working conditions and more pay. They won’t give that to you? Leave and start your own business. Find the perfect small business idea and get started now!

You deserve everything you want. Make the choice to be a will. Your future is in your control. Make it happen today.

next: COVID-19 is Killing Your Competition
Return to blog

Super Value Town is a subsidiary of WebTYs. We've planned, designed, developed, improved, marketed, and grown more than one thousand web sites over the past 28 years. When you're ready to start, grow, or rescue your business, Super Value Town will help for less -- a lot less.
web site - advertising - seo - consulting - hosting - email - domain name - logo - business cards - maintenance - tech supportClickTap a service to learn more. You get all the benefits. We do all the work.
Get everything
you need for one low price
$400$197
get the details now